A Blast of Winter

Now that we've moved out of the west-facing oven of an apartment, summer has apparently left us. I don't know what normal weather is around here, but it sure feels like we skipped fall and went right to winter. Mornings are in the high 30s or low 40s, and it almost gets up to the mid-50s in the daytime. Oh, and anyone that tells you it doesn't snow much up here is a liar; there is already rumors of snow in the foothills, and it's not even October! We don't mind though, after the 110 degree days of July and August, we're quite happy with the cooler nights. In fact, we still refuse to turn the heater on, but that is mostly because the ducts and filters need to be cleaned. I should probably do that soon so my Dad and sister don't freeze when they're here next week.

We officially closed today! The locksmith is here right now changing our locks because there are so many copies of the key out there. I'm in the process of cooking our first meal (Zatarain's black beans and rice with turkey sausage in case anyone is curious.) We both successfully took our buses this morning. Unpacking is about half-way done. A lot of what is still packed is stuff we don't have the right storage for so it will have to wait until we can make a Target trip tomorrow. I took some "before" pictures during the unpacking yesterday. I'm hoping very soon to have some "afters".
Posted by Leighann at 19:50 No comments:

first night in the new house

We are finally in but only slightly unpacked. We were afraid it wasn't going to happen yesterday. Turns out the title company found a lien on the property about 3 weeks ago and neglected to tell all of us, including the seller. The seller had acceptable proof that the debt had been paid, but wasn't asked for it until it was too late to close yesterday. Now we are closing on Monday, but the seller was nice enough to give us possession of the house as scheduled. I'm sure he was as frustrated as we were, considering this all could have been avoided if the title company (that we both paid) had given him or his agent a call.
Moving was stress-free. We hired movers who were professional, friendly, and even showed up early. It cost exactly what they said it would- no surprises. Because of timing, Nate stayed in Bothell with the movers and I hung out here in Ballard waiting for the Comcast tech to come. While I was waiting I walked to downtown Ballard for some lunch and hung out at the locks watching the boats go out to The Sound.
The Comcast guy showed up 7 minutes into the 4 hour window which is amazing. Our signal was not strong enough so I watched in horror as he pulled out a ladder with giant hooks at the end, hooked it to the power line, and climbed up to run a new line our to our house. I did not know power line wires are strong enough to rest a ladder on.
After the cable was fixed and the movers had left, we drove back to Bothell to get the cats. They are adjusting pretty well, though this house is far bigger than any space they've ever lived in. They are also terrified of the basement stairs which is fair because they are weird, crooked stairs. I put the litter box down there, so hopefully they get over it fast.
I'm so glad we are finally here, but at the same time it doesn't feel real. I've been in apartments for so long, it's strange to listen and not hear anything. Our street is super quiet and I love that about it. Unfortunately, we completely forgot to take pictures today.. maybe tomorrow we can take some pictures of us unpacking.
Posted by Leighann at 21:24 1 comment:

signing our lives away 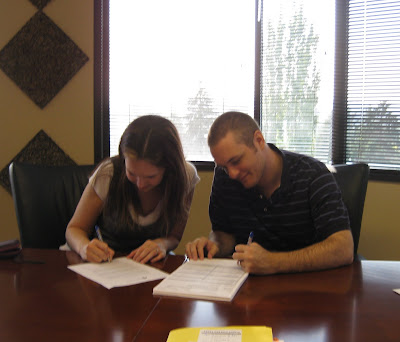 We signed all of our closing papers yesterday. It wasn't nearly as long as I thought and a lot of the paperwork seemed redundant. We took one final walk-through of the house afterward. The bee keeper had removed the honey bees from the back yard which is nice. They're now living on a bee farm somewhere. With all the weird furniture and dark curtains gone, it looks so much more cheerful inside. I can't wait to see it with our stuff. Tomorrow is closing and we get the keys. Then we immediately change the locks.
Posted by Leighann at 07:51 3 comments:

the digital transition has been going on for some time now 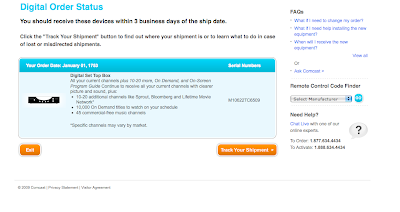 I got a letter from Comcast in the mail telling me I need a digital converter box to keep getting digital cable channels on any tvs without cable boxes. I logged in to see what I need to order, but apparently over 250 years ago I already ordered it. I can be forgetful sometimes. It's been over 3 days since my order so I wonder where it is...
Posted by Leighann at 21:35 1 comment:

The appraisal came back and was fine. So far we are ahead of schedule to close on the 25th. We picked an insurance company and we're working on finding movers. We learned our lesson trying to do the last move ourselves.
Posted by Leighann at 15:11 3 comments:

things to consider at work

Not naming names or speaking about any place in particular but there are a couple things that I'd like to have stopped:
- grunting noises in the bathroom
- talking baby talk to your kids/wife on the phone outside of my cube
- pot luck
- heavy breathing when you walk- seriously you shouldn't get out of breath walking to the printer

Bringing me candy and/or diet coke is acceptable.

Things to not do on the bus:
- talk to me
- have any part of your body cross the cushion divide
- sleep next to me
- smell like lysol
- wait until I pull the chain, then come sit on the aisle seat so that I now have to walk over you to get out

Ok. I just wanted to clear these things up because clearly this week there's been some confusion.
Posted by Leighann at 22:36 No comments:

a house in ballard

OMG we're under contract on a house. We were out with our real estate agent and getting disappointed because anything that wasn't a fixer had something wrong with the location. This was the very last house we looked at and we loved it. It's just a few minutes walk from the shops and restaurants in downtown Ballard. Nate can walk to the connector and I can walk to my bus stop. It's the smallest house on an expensive street which is smart from an investment standpoint.
The inside definitely needs work. The floors REALLY need to be refinished. Several windows need to be replaced. Many of the appliances could go at any moment. The electrical and plumbing are in need of updating. The sewer needs to be fixed. It's a shame that it wasn't well taken care of because the house itself is great. It has really high ceilings and a really nice floor plan that fits our needs perfectly. We're really excited to work on it over the next few years.
So I've watched a lot of these home buying shows on HGTV and still didn't really understand how stressful the process is. They often end the show with the offer getting accepted and you assume after that it's smooth sailing. It's been over a week since our offer got accepted and I still feel like everything could fall apart at any second. The negotiations for repairs were stressful because this is an estate sale. I felt the seller took us asking for repairs as an insult to his late parents, which was something I didn't expect. For us it's a business transaction and an exciting time, but it must be difficult selling your family's home for less than you think it's worth.
Now we're worried that something will go wrong with the appraisal. There are so few sales in that neighborhood (I think it's a good thing that people don't want to move?), coming up with fair market value was difficult. Our lender assured us that it would be fine and we wouldn't knowingly have overbid on a house so hopefully all goes well.
We went to Home Depot yesterday to start adding up the costs of all of the things we need or will need in the first year. Turns out things that we need aren't that expensive if we do them ourselves, but if we hire someone labor costs won't be cheap. With that being said, Nate's dad is visiting a week after we move in and my parents are visiting for Thanksgiving. We're hoping they can teach us how to do some of the easier projects because we are clueless about this stuff. We actually tried to buy some tools yesterday and gave up. What is the difference between a $100 drill and a $400 drill? LOL we have a lot to learn. If all goes well, closing is on Sep 25th. I'll keep you posted.
Posted by Leighann at 09:15 No comments:
Newer Posts Older Posts Home
Subscribe to: Posts (Atom)