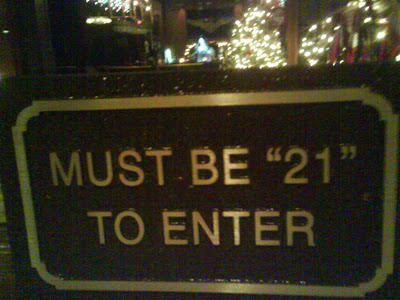 Nate took this picture at the Crown Plaza in Pensacola. I'm guessing fake IDs and "tips" aren't discouraged. Consider this your early Christmas gift.
Posted by Leighann at 17:27 1 comment:

While in Fort Myers this weekend, we attended the Everblades teddy bear toss. When the Blades score their first goal, you throw your teddy bear onto the ice. This is not your average, lame toss. The people bring bears by the bag. If you are ever in Ft. Myers in Dec, you need to check this out. 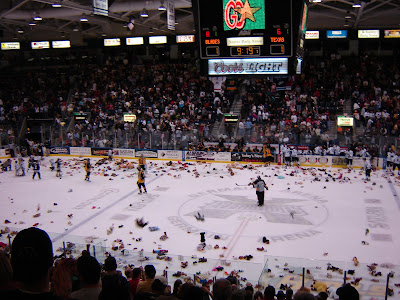 About 10 seconds after the goal 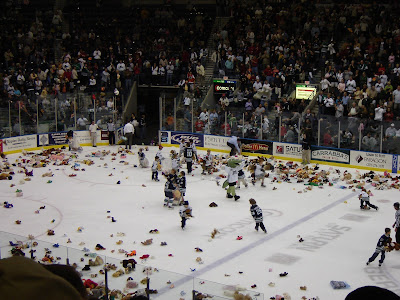 Players and kids tried to clear the center of the ice while Swampee stood around being a tool. 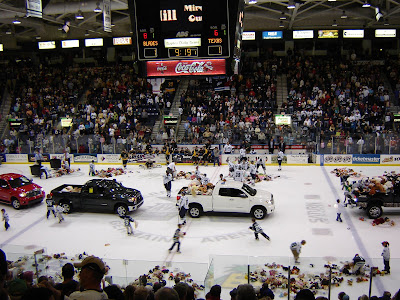 Four giant pick up trucks couldn't hold all of the bears so they had to roll out bins and bags to haul them off.

One careless truck driver ran over several animals, popping the head off of one as the crowd gasped. I can't make this stuff up. It took about 30 minutes to clear all of the bears and resume play.

EDIT: The bears are donated to hospitals and charities. And they aren't all bears. I threw a beanie scare crow. We're not crazy.
Posted by Leighann at 20:28 3 comments:

Why not just block the net with a fat guy?

Nate has asked me several times why hockey teams don't just employee the biggest man they can find to completely block the net with his obesity. Today the story made the front page of digg! The article is rather long, but it's funny and I suggest you read it.
To summarize:

There are, she said, nonnegotiable restrictions on the size of goalie pads, and no regulation goalie pads would even come close to covering the body of a man who makes John Goodman look svelte. In practical terms this means a mammoth net-minder would have to absorb quite a bit of punishment on his exposed body from hard rubber pucks hurtling toward him at upward of 100 miles per hour. To pull this off, a team would not only have to find a uniquely fat guy, they'd have to find a total masochist.

The internet is buzzing over yesterday's Word of the Year winner, w00t. Some are upset over the use of numbers in place of letters in words. Allow me to put this contest into perspective. Recall, the Mr. Splashy pants voting. It seemed that everywhere you turned on the internet, you were being urged to vote splashy. In the end, it turns out 150,000 people total voted in the contest. Compared to the population of english-speakers in the world, that's a tiny number! I have a feeling that the impact of this contest will be barely noticeable. It seems like a huge deal when it's front page on digg and reddit, but it will pass in a few days. The WOW kids aren't suddenly allowed to write their school work in l33t. So, let's all calm down and just see the humor in it.
Posted by Leighann at 05:54 No comments:

It's official- Webster's Dictionary has made l33t speak socially acceptable. They've selected a Word-of-the-Year from the most frequently looked up words on the website.
See the winner here!
Posted by Leighann at 07:38 No comments:

Today we will learn the winner of Greenpeace's whale naming competition! The winner will be posted HERE.

Also, right now Christine is in Oslo seeing Al Gore accept his Nobel prize. If anyone can find video of it, let me know!

Splashy victory!! Read the store here.
Posted by Leighann at 03:18 No comments:

There must be some mistake!

*victory dance*
Posted by Leighann at 11:05 No comments:

..or the status quo 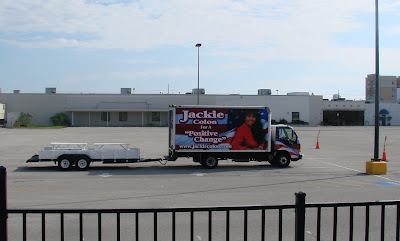 The staging for Melbourne's Christmas parade was occurring in the parking lot behind our apt this morning. Nate almost crashed the car from the excitement of finding an unnecessary quotation mark this close to our home. Bonus points for her name. Also, does anyone know what the accepted practice is for the direction of a flag on a truck? She went both ways here. Maybe the rule differs if the flag is placed on your cab or your trailer. OR maybe this is one of the "positive changes" Ms. Colon has made.
Posted by Leighann at 09:00 2 comments:

Can you tell it's my day off? I wanted to give The Seventh Planet a nicer look, so I made a few changes.
Please let me know what you think! I know very little about web design and want some suggestions.
Posted by Leighann at 16:17 2 comments:

Most of us have been to a small business that required a minimum purchase amount to use your credit or debit card. I didn't realize that this violates the merchant's agreement with some credit card companies.
From the Visa website:

If you run into a problem like this with a merchant, please notify the financial institution that issued you your Visa card. These institutions have access to the appropriate Visa rules and regulations and can help you document and file your complaint. You'll find their address and/or telephone number on your Visa statement. Their telephone number may also appear on the back of the card itself.

Many small retailers complain that high fees force them to take these measures. I don't understand why they haven't factored those costs in when pricing their merchandise. As a consumer, it's not my responsibility to worry about a merchant's cost of business. All of that should be kept behind the scenes and not interfere with my transaction. Not only is it unprofessional, but it will also turn off a lot of shoppers that put small purchases on their cards to earn reward points.

Visa, Mastercard: Minimum purchase requirements and fees are not allowed. Call the number on the back of your card to report the merchant.

AMEX, Discover: Minimum purchase requirements and fees are allowed as long as they are the same for all card types.

Note: These rules apply for both credit and debit cards. For more information, see the following articles:

Posted by Leighann at 09:03 No comments: