Here is something addictive for tomorrow when you're bored at work:
www.netdisaster.com

Type in a website you hate, choose your weapon, and go at it.
Posted by Leighann at 07:21 1 comment: 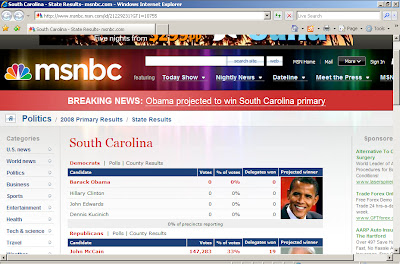 Maybe they gave Keith Olbermann control of the website...
Posted by Leighann at 07:12 No comments:


If any of you were watching the Jan 4th Republican debate in FL, you may have caught this little clip. After Mitt Romney's question, you very clearly hear someone whisper "raise taxes" or "he raised taxes". The internet (and our living room) was abuzz after this trying to figure out if it was a moderator, another candidate, or someone in the control room. At other points during the show, we heard paper moving and note-taking, so someone's mic being a problem.
A couple theories are being thrown around on this one. Of course, the Democrats and even Ron Paulbots are convinced this is a cue from one of Romney's guys. This isn't entirely far fetched, considering his response. My first thought was that the tone was sarcastic, leading me to believe Brian Williams had uttered it. That would be in character for him if you've ever seen him off the Nightly News. He's a pretty funny guy, and if he did say it, I'm sure he didn't expect his mic to be on. MSNBC, the network hosting the debate, released this blog which concludes an audience member was responsible for the whisper. (Read it here.)
MSNBC's conclusion seems to be the least reasonable, considering the mic several times picked up the sounds of paper and writing. The sounds were not frequent enough to be a journalist and were far too frequent for any audience member. It was usually during the response to a question as if the moderators had thought of a follow up and jotted it down, or a candidate was taking notes for their rebuttal. If anyone saw the whole debate, let me know your thoughts. It's still in my DVR =)
Posted by Leighann at 05:37 No comments: 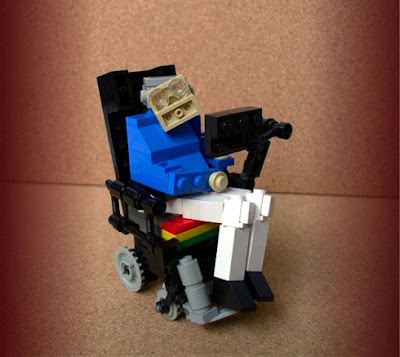 I found this gem http://www.thelandsalmon.com/technology/stephen-hawkings-quotations.html
this morning! It's the greatest Stephen Hawking quotations. My favorites are #5 and #9 which made me laugh because they sound a bit like myself. (Only I'm the one still looking while crossing the road, not the one calling you out on it.) Enjoy!
Posted by Leighann at 07:05 No comments: 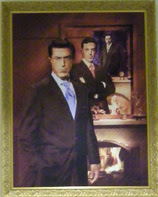 The Smithsonian National Portrait Gallery has finally recognized our greatest American Hero: Stephen Colbert. His unique "triple portrait" will be on display for only 6 weeks, so if you will be in the area check it out.
The portrait can be found on the second floor near the presidents' hall. Proceed to the end of the hall and take a left in the doorway labeled "restroom". The portrait is located above the water fountain.


So many years ago, before Nate and I even began dating, we went on an exciting expedition to Target. One we will never forget. On the toy aisle was a horse on a stick... and it played this song. We still sing the song frequently. This is a smaller version of the horse. If you google "im a pretty pony" (trust me lol) there is a you tube video of some baby on a giant version. I thought it was creepy to post a video of someone's kid but check it out if you want to hear the lyrics more clearly.
Posted by Leighann at 22:31 2 comments:

There isn't much to see now, but as we get farther in planning we'll keep it updated.
Posted by Leighann at 17:01 1 comment:

So my last post came a couple hours before Nate proposed and since then I've been to preoccupied to post! We spent Christmas and New Years at home by ourselves, which was really nice and stress-free. Spending Christmas alone won't necessarily be the tradition, but it was nice for our first holidays living together. Now that the season is over I can come back to posting regularly. (In the meantime read The Recycle Bin.) Also, tonight I'm going to start up one of those wedding websites. I'm not sure if they are for public viewing or if you need to log in to view it, but I'll let you know. Most people will be traveling to the wedding so there aren't going to be all of the parties/ showers that people typically have. This way people can still know what's going on if/when it's convenient for them.