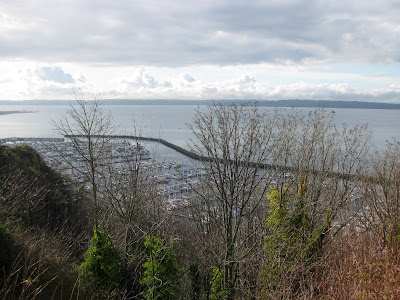 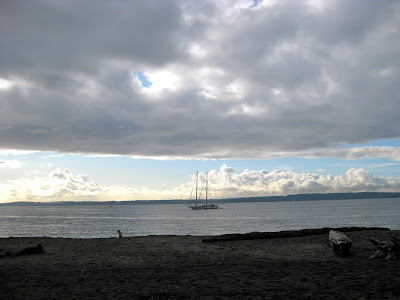 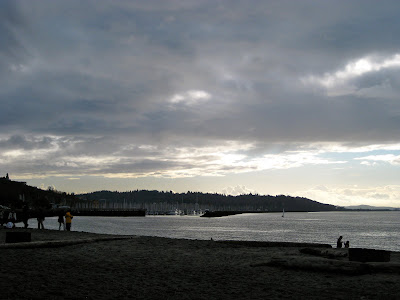 Yesterday the sun peaked out so we decided to take a walk to the beach. The first photo is on Sunset Hill. If you notice how far down the marina is in the photo, that is how far you have to walk down to get to the beach. The path is a little further up the street and consists of a series of steep staircases and hiking trails. (You can also walk the long way on the bike trail which is much less steep and is probably an extra mile.) The beach pictures came out pretty dark even though it seemed bright to us (in comparison to normal winter days.) They had several fire pits, so I'm thinking bonfires are in our future.
In both the first and second pictures, you'd have a stunning view of the Olympics if it had been a clearer day.
It's funny that we moved to an opposite corner of the country and we are still 2 mins from the beach- even though it's a completely different kind of beach. I look forward to many sunsets in the future!
Posted by Leighann at 08:03 2 comments:

the green roofs are coming 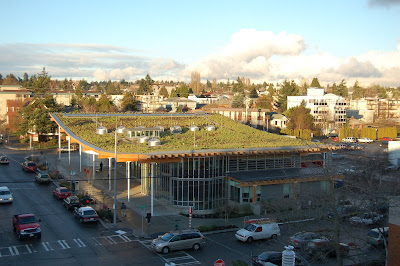 As I mentioned last week, we made a visit to our library down the street. I had no idea what the point of putting grass on the roof was so I did some research on it. Read about it here.

Speaking of plants, many of the books we got were about gardening. Nate was out in the garden this weekend. (I was being lazy inside and not feeling well.) He got rid of a gigantic plant by the garage that did not look like it belonged in WA . In it's place he moved the ridiculously heavy cement sink that used to be in the basement. That will be our bed for planting herbs. He did a lot of work raking as well. The only thing not done is disposing of the gigantic branch that fell off our neighbor's pine tree. I don't want to have to pay for the city to take it so I think we should toss it back over the fence into their yard. They are lucky it didn't damage our house when it hit. Nate said I was being cranky. =)

We also checked out a Rachael Ray 30 min meal book and have been trying recipes. Some have been good; most have been misses. All of them have gotten us eating more veggies than we had been previously so I suppose that's good. The kitchen is really well laid out for us both to be in there and not bump into each other. The best recipe by far was a chicken piccata pasta toss- here. I'd recommend using less than a full pound of pasta and choosing a whole wheat one. The sauce is flavorful enough that you can't tell it's whole wheat, but there wasn't quite enough for a full pound of pasta.

While exploring this weekend, we found the best grocery store ever (and only 5 mins down the street). We used to love going to Trader Joe's for all of the unique things, but they don't have everything you need for a weekly trip (trash bags, cat litter, diet coke, a deli counter.) Ballard Market has to be the best idea ever. It's 50/50 with regular grocery store items and unique/organic things compared to about 90/10 at our regular grocery store. It's arranged with the organic stuff mixed in with the regular stuff so you can see what the price difference is without going across the store to the organic aisle. They've also got a ton of stuff from local companies and the best produce section ever. Best of all, I didn't feel like a tool like the one time I went in Whole Foods to use the bathroom.
Posted by Leighann at 22:33 No comments:

first weekend of the new decade

It's bedtime but I'm trying to be better about blogging this year. A quick summary of our weekend:
We were very productive this weekend, leading me to believe every weekend should have 3 days. I'm thankful another federal holiday is right around the corner...
Posted by Leighann at 23:07 No comments:
Newer Posts Older Posts Home
Subscribe to: Posts (Atom)