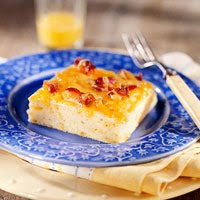 Dinner tonight was this maple-bacon oven pancake. I recognize that it's supposed to be a side dish, but tonight it was a main dish. The maple syrup gives a hint of sweetness to complement the saltiness of the bacon. This was super cheap and easy to make.
Posted by Leighann at 17:21 No comments:

Happy New Year!!
I hope everyone had a fun night. We went to a party with friends and had a nice time. Our new favorite game is Wit and Wagers which is trivia game where you bet on correct answers. You can complete a round in about 20 minutes and you don't have to be good at trivia to win- you just need to make smart bets.

My resolution this year is to learn some of the recipes of my family. Whether they turn out successfully or not isn't that important. I just want to make an effort to try.
Yesterday I tried to make pastizzis. Mine came out pretty tasty, but no where near as buttery and golden as they are supposed to be. Part of the challenge is the older generation of Maltese women didn't really write down the recipe. Our family has a video of my great grandmother making them (filmed in the 90's) and she doesn't measure anything. A quick You Tube search shows that apparently that's all anybody has to go off of.
My recipe was as follows:
Combine 3 cups of all-purpose flour, 1 cup of cold water, and 1/2 teaspoon of salt in a bowl. When it forms a ball of dough, refrigerate for 30 mins. Roll out the dough as thin as possible and rub Crisco over one side of the flattened dough. [Two things here- 1. I could not determine how much Crisco to use from the grainy videos available. I did a very thin layer. 2. I had to split the dough ball in 3 and repeat this 3 times due to lack of space to roll out the whole ball.] Roll the dough up so it ends up as a tube shape (as if making cinnamon buns). Rotate the tube of dough 90 degrees and roll out as flat as possible again. Crisco that layer and roll up like a pinwheel again. The idea is to create layers and alternating direction helps make it flakier. After 3 roll outs, take the final tube and refrigerate for 1.5 hrs. [Again, in my case I had 3 tubes since I'd split my dough.]
While that is cooling, make the filling. These are traditionally made with either cheese or meat. The cheese filling is just ricotta, egg, salt and pepper. My estimate is about 1 egg per small (I think it's 16 oz) tub of ricotta. I used 1 tub of ricotta and did not need all of it. The meat filling has a lot more variation. Brown ground beef (about 1/2 lb) and drain well. Place it back in the pan on medium. Add enough tomato paste to make it sticky. I needed about 2 heaping tablespoons to do so. Here you add some frozen peas and there is no exact science to this part. Just add however many peas you want to have in your filling. My filling was probably only 10% peas total but you can use more if you like. Frozen peas only need to cook for about 2 mins. The seasoning of the meat filling differs by family. Mine uses a small amount of cinnamon and I think salt and pepper. I didn't have cinnamon so I used allspice and garlic power (2 parts all spice/1 part garlic powder) until I liked the flavor. Other recipes call for curry which would also be good. Once the peas are cooked, remove the meat mixture from heat. It will be easier to work with if it's cooled so you may want to just leave it on the counter until you need it. It's important that both mixtures are not wet.
Once the tube of dough has chilled, preheat the oven to 375. Cut the dough in 2 inch pieces (just like making cinnamon rolls). Use your fingers to flatten each piece into a circle about 4 inches across. You want to try to create more layers as you do this so flatten it from top to button, not turning it to the spiraled side. Scoop filling into the center of the circle and pinch closed in a half-circle shape. This is just like making a dumpling or ravioli. The amount of filling is however much it takes to fill the pastry and still allow you to close it. Coat the pastizzi in another layer of Crisco and bake until golden brown. 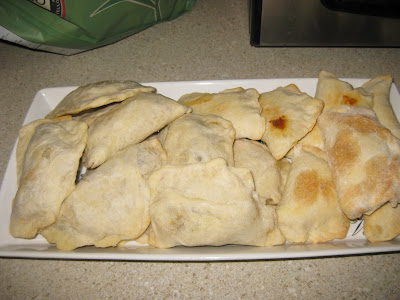 As you can see, I did not achieve the flaky golden brown texture I was supposed to. [If you are unfamiliar with pastizzi, do a search online to see what they are supposed to look like.] It should be as flaky as a croissant and these appeared more bread-like. Next time I will use about twice as much Crisco in my layers. These actually did have flaky layers when you bit into them, so my roll out technique was right. I just didn't have enough fat to create the golden brown color. I'm going to definitely make a second attempt in the future because I feel like with some tweaks, this could be correct.
Posted by Leighann at 09:53 No comments:
Newer Posts Older Posts Home
Subscribe to: Posts (Atom)