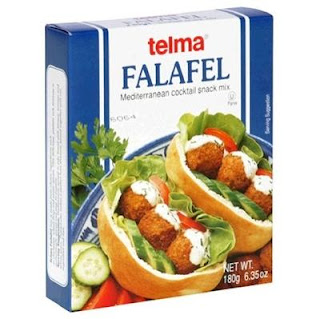 Today I learned falafel mix makes an excellent breading for chicken! Just toss the chicken in a bowl with just enough olive oil to coat it.  Add enough falafel mix to coat your chicken and toss everything together.  I made bite-sized pieces which was 425F for 8 minutes with the convection fan on.

To go with it I made a slaw with hummus instead of mayo dressing.  I took a bag of slaw mix (shredded cabbage) and sliced some radish into it.  Then I thinned out some hummus with some lemon juice to dress the slaw.  After I mixed the slaw and the dressing I added freshly chopped parsley, salt, and pepper.

I warmed up whole wheat tortillas to put everything in.  The recipe I adapted this from is here.  The pita bread they show in the picture is the driest substance known to man.  Get yourself some good whole wheat tortillas like I did (8 inches should be plenty.)  TWSS.  Or to treat yourself, get some soft and fluffy naan.  Either way, stay far away from the pita pockets shown.