We finally made it into the city this weekend! Weezer and Angels and Airwaves were playing at the Key Arena and it was really fun. For those of you unfamiliar with the area, the arena is right under the space needle. Even knowing that, it was still surprising to exit the concert and be greeted with a giant landmark in my face.
ANYWAY. 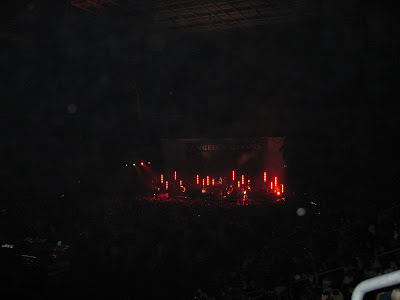 We missed the opening band- I couldn't even tell you their name. We wanted to get a drink, but no alcohol was allowed in the seating area so we had to drink on the concourse. We got to our seats (yes, we were old and sat in seats) just in time for Angels and Airwaves. I really enjoyed them. I know this picture didn't come out very nicely, but if you can imagine, the orange lights looked like falling meteors. It was a really different light show.


Weezer was a blast! I was never a huge Weezer fan, but I knew just about every song they played and they sounded great. They had a trampoline on stage and generally acted ridiculous. During their encore, they let about 20 local musicians up on stage to perform with them. They had just about any instrument you could imagine and played some of the sing-a-long classics. It was really fun and I almost forgot to take video, but I did take this one earlier in the show. I imagined the crowd playing along on their rockband instruments because I know that's what nate and I were doing. Nerds ftw.

So we decided when we do end up buying a house, it's going to have to be in the city. We'd both rather sacrifice size for location because it's taken us a month living up in Bothell to make it down to the city. That is too long!
Posted by Leighann at 09:55

Not a fan of Angels & Airwaves here, but Weezer would have been cool. Actually, they're down here soon, but I think they're in San Antonio, not Austin.

Actually, they are coming to austin Oct 20th! I will be there.

I am totally going to rock out to that song because of rock band. I have to say I can rock that sound on med in guitar, expert on mic, and hard on drums. :)