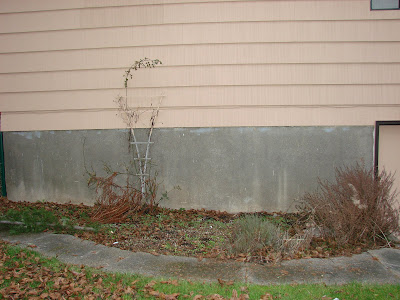 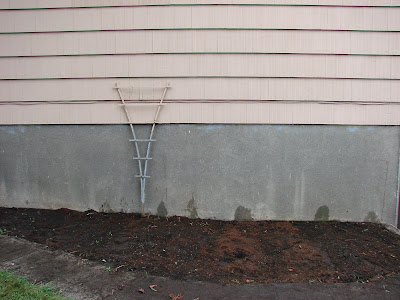 We had beautiful weather yesterday so we took a walk to the library to get some more cookbooks and then down to the locks. While walking, we noticed many plants starting to bloom and the trees starting to get leaves again- in the beginning of February! We were excited to start planting since it seems we won't get another frost so we stocked up on seeds last night.
We spent the better part of today mowing, raking, and pulling up weeds. The pictures above are the beginning of the herb garden. The vine on the trellis had huge woody roots which were hard to get out and unexpected on such a small vine. We planted parsley, basil, rosemary, thyme, chives, and cilantro. A lot of them can grow indoors, so I'm not sure how they'll do out in the elements when they are starting as seeds.
In other news, I would like to announce that I finally made good chili. We watched the Super Bowl on the comfy new couch, extra careful not to spill any of it. The commercials were a huge disappointment, by the way. We laughed at a couple of Dorito ads, and started to laugh at the Green Police until it was actually for something green. I would have laughed harder if it was for a Hummer or something, but instead Audi got an eye roll.
All in all, it was a highly productive weekend rather than a relaxing one. Next weekend we have some painting to do which has been put off for months. More pictures to come as projects are completed...
Posted by Leighann at 22:02